How I tested popular popup blockers 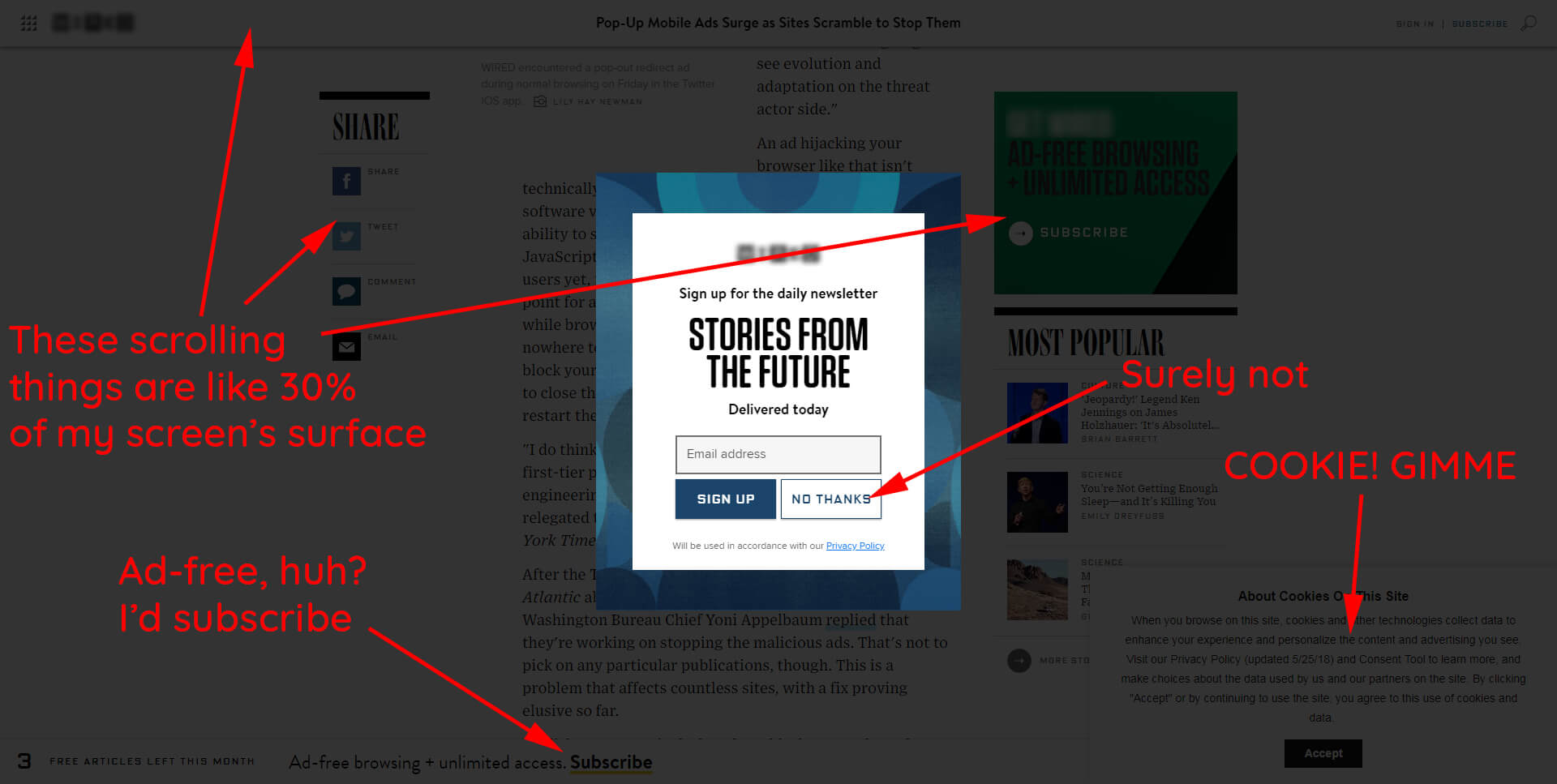 Hello. This is the story about how I tested all popular Chrome popup blockers during recording a video showcase for the extension I created myself. And what are the results.

For people, who want them fast. Results are sane enough. It is okay to use it.

And… you did not leave, fine. Conclusion is not the only matter. Let’s read, then.

So I am a developer. I created an extension, ironically, inspired by medium.com. Part of developers articles public here or at very similar platforms. You probably faced(or facing right now if you did not pay) a lot of bars at top/bottom or even popups interrupting you while reading.

I tried to remove them using the ad blocker feature — it can remove any element from the web page. But it would appear after reloading anyway. So I wrote a script that removes stuck to screen elements(like bars or popups with omnipresent cookies) permanently. And then I realized that someone, probably you, my dear reader, could find this kind of tool useful.

As you could know, to make the thing noticeable, it should be advertised. At least a little. So my plan was to expose “big” popular blockers in not doing their jobs properly. I was satisfied. But my expectations about the usefulness of these modern blockers was quite lower. The conclusion will be in the end.

I collected about 20–30 websites with annoying popups, half-screen bars with cookies or different ads. Installed about ten most popular popup blockers plus few ad ones. And started to test, recording my screen, so I can montage showcase.

Firstly, things went swimmingly. Popups kept appearing. Cookie notifications were still annoying. I had no hope panels and “buy smth” ads at top/bottom will disappear. But after a dozen of websites, I started to not see expected popups. “So it works” — thought I. And it worked. But all my extensions covered only about 30–40% of websites, other ones were still polluted.

I recorded enough to make the video I wanted. I started to montage, blah-blah. Then, based on first feedback from users, I removed part of possibilities. The less the user can, the more he is satisfied. I plan to return these opportunities, actually. But after that, I had to re record all data. I added one or two new extensions. Even paid one. And was about to repeat it the old way…

From the start I understood that something went wrong. Or, I can say, went right. First 4–5 websites from the previous road map were cleared by my pack of extensions. Not needed video content, huh? For some unknown reason blockers decided to block this time. About 70% of websites were free from popups. Not from cookie notifications and other layout, though.

I spent a few hours trying to get websites from different areas of life, where extensions were not working. Another problem I faced is that sometimes popups did appear but not for record. And when my “camera” was ready, they did not. So I can not characterize these blockers as stable.

Few more things, I had noticed, during mine little investigation:

I can not call any of my computers powerful. After I enabled all extensions(average difference in weight x100 with extension of mine, in number of scripts to execute about 100 as well), every Chrome launch took much more time, then a clean version. Part of websites loads became torture. I understand tha it is not how it is supposed to work. I mean installing all the extensions at once, but I will make my message clean. These blockers apart miss a lot. Having it all together greatly increases percent of blocked popups, but noticeably reduces the performance.

If you don't use Google for your searches, most popup blockers trigger when you just enter a different search engine. And they will not allow you to open any result. And if you force them to, they will not allow you to open the result at the new tab by clicking ctrl + mouse click, or right click and choosing “open link in new tab”. I understand how these scripts work and why. But as a user, I actually do not want them to. It is not setting up from any settings anywhere. So far, I used my “extensions starter pack” for a couple of hours, and this “feature” annoyed me much more than any popup in this life. To remove all kinds of pollution, you have to sacrifice something clean. But if it is not removing ALL problems, and still cuts your possibilities — screw it!

So far, it is almost all I wanted to share with you about. If you stop from reading now and think about what I want to say, you, probably, would be wrong. If you are not a fastidious guy, few or probably even one popup blocker extension in pair with any fine ad blocker would be enough, to make yourself comfortable. I believe developers updating their databases and scripts full time to make you even more comfortable.

You, probably, are not even annoyed by closing infinite popups and cookie notifications at almost every(cookie at every, it is the law), so there is nothing useful in using nor mine, nor any other tool for that. It is totally okay. I guess.

But if you are getting annoyed by closing omnipresent notifications or do not like, when something interrupts from reading, and you do like stability, you should definitely take a look at the product, I developed. This article is not about it, so I will not say anything more. You will hear about it someday anyway.

Not saying goodbye. Have a good time!